NOT SINCE at least fifty years ago has this part of the world been such a point of contention.

As reported by DEBKAfile and not seen any where else in the main stream media to my knowledge:

"In a surprise step, Egyptian marine naval and marine forces Thursday morning, March 26, seized control of the strategic Bab El-Mandeb Straits to foil Tehran's grab for this important energy shipping gateway between the Red Sea, the Gulf of Aden and the Suez Canal" 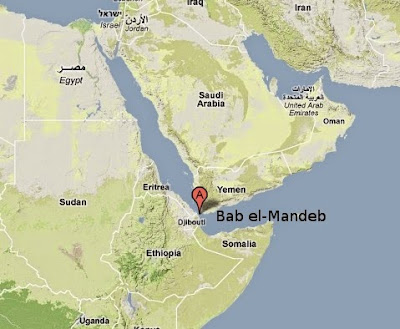 Aden and Bab el-Mandeb one of those oceanic and naval choke points as listed by Admiral Jackie Fisher from over one hundred years ago the control of which was essential to geo-political and strategic considerations of the highest order.

As it was in the days of Jackie Fisher so it is today but much more complicated.