All of this sounds too good to be true.

But is REAL, not pie-in-the-sky or on-the-drawing-board technology. Is a good example of fly-before-you-buy type procurement.

NOT for aviation but rather for a submersible.

A naval drone, an unmanned and underwater vehicle.

NOT [so far] a submersible having a combat capability. That glider used almost exclusively for reconnaissance, intelligence gathering, patrolling, etc.

"If Santa can harness reindeer to fly the globe, the Navy can use 'hydraulic buoyancy' to wage underwater war"

"While you were out shopping Sunday for those last-minute holiday gifts, the Navy pushed ahead with its own vision of an underwater sugar plum: a fleet of “long endurance, transoceanic gliders harvesting all energy from the ocean thermocline.”

"Unlike their airborne cousins, Navy gliders are not powered by aviation fuel. Instead, they draw energy from the ocean’s thermocline, a pair of layers of warm water near the surface and chillier water below." 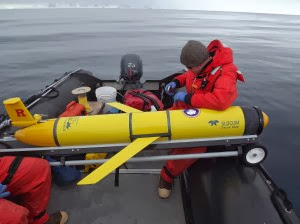 This image shows the Slocum Glider. With a human for the perspective of scale. Looks kinda like a cruise missile but operates of course strictly under the water. This particular glide in the image used for Antarctic research. Cannot surface from under the ice to send data remotely to a research facility but must find open water first?

The glider having a capability for five year [???] missions operating totally autonomously and ABLE TO GAIN FURTHER ENERGY FOR A CONTINUING MISSION FROM THE SURROUNDING WATER ITSELF. AUTONOMOUS IN A MANNER NOT EVEN THE AERIAL DRONES CAN EVER ATTAIN!!

The oceanic thermocline [that differential of temperature found at various depths] through some process and mechanism the source for re-charging the glider.

Gliders also again already a proven technology and relatively [much less] cheap compared to other military systems. Naval forces will be able to proliferate the oceans of the world with these "vessels" in profusion, the loss of some for whatever reason not even a matter within the overall scheme of things.