"The bizarre and baffling tale of an elderly Palo Alto man who's been detained by North Korea [DPRK] for more than a month grew even more mysterious Saturday as new details emerged about his role during the Korean War secretly training anti-communist guerrillas fighting behind enemy lines."

American retired and elderly [eighty-five] year old Korean War veteran incarcerated as a prisoner-of-war [POW] by the North Korean, sixty years after a cessation to hostilities. An armistice, a truce, a cease-fire holding, a state-of-war still nonetheless existing, Newman technically according to North Korean law [?] still an enemy combatant. 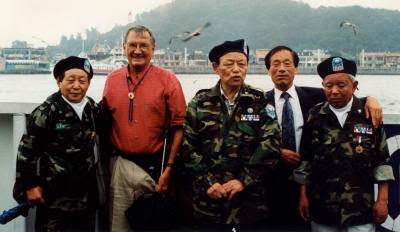 A photograph of this type particularly rankling to the DPRK. Newman posing with South Korean anti-communist partisans as from the war of sixty years ago!.

These "new details" seems to suggest that:

* Mr. Newman indeed in continued and on-going AND OPEN communication with those South Korean veterans of that anti-communist partisan campaign.

And after having made a ten day visit [a tourist excursion?] to North Korea [DPRK], Mr. Newman taken off the airplane just prior to take-off and now held captive, having to do the ritual of confession, beg for contrition, etc.

Mr. Newman now a bargaining-chip? That North Korean dictator wants something and will use Mr. Newman as leverage?

If you are an American veteran of the Korean War, please do not make any trips to North Korea. You might find yourself in hot water and in for a very rough time NO MATTER YOUR STATUS!