As shown on public Broadcast television the other night a polar expedition [1931] with a definite and most surprising military dimension.

This was a totally new one to me. That polar expedition of Sir Hubert Wilkins the goal of which was to reach the North Pole via submarine.

A leased [for $1 per year] American O Class diesel/electric submarine having been refurbished and equipped for the task.

American O Class submersible from the ear of the Great War. Looks kinda like a fish.

"USS O-12 . . . was used in an Arctic expedition by Sir Hubert Wilkins and was renamed Nautilus.

My instantaneous reaction being that such an idea was preposterous!!

At that time submarines not being able to snorkel, nor break through the ice rising from submerged to the surface, totally lacking any sort of air-independent-technology. Recharging the batteries from the diesel engines more or less an impossibility?

That seven hundred mile [1,100 kilometers] voyage under the ice from the edge of the pack ice to the pole impossible given the technology of the day, not even a realization until the advent of nuclear power.

That "renamed" vessel Nautilus NOT successful in achieving the pole. Was submerged and did run for a time under the ice, albeit briefly. 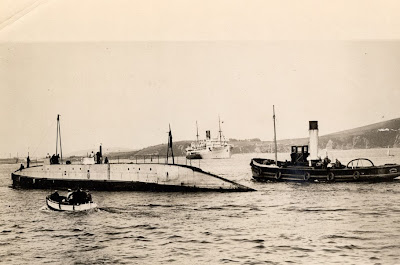 That modified vessel Nautilus. The conning tower either removed or retractable?

Important research nonetheless having been carried out, the Nautilus returning to home base relatively unscathed.

It is worthy to note that conditions for the crew on the submarine were deplorable at best, downright dangerous at worst. Those O Class subs designed strictly as defensive weapons systems, coastal huggers for the most part and not designed or intended for use in pelagic [deep] waters.

Again, the vessel extensively modified for the research voyage, those modifications as needed for polar exploration taking into consideration the difficulties as were encountered: 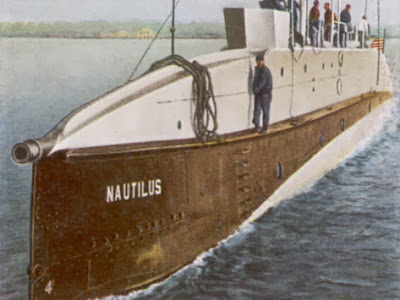 "Thirty-two new features were added to the boat . . . These included a cushioned guide arm, a cushioning bowsprit 12 feet [four meters] long to act as a bumper, an ice drill to provide access to the surface in case the submarine was unable to break through the ice, an emergency air intake system, and a diving chamber. The original superstructure was removed, and the conning tower and periscope were modified to be retractable . . . also . . . the deck fittings enclosed within a wooden superstructure four feet wide and six feet high, inside of which he installed extra buoyancy chambers, which he considered necessary to prevent loss of stability during surfacing. On top of the superstructure [were] installed iron-shod 'sledge runners' and two cleats at each end"

"[the Nautilus was ] equipped . . . with several clever devices for under-ice operations. One was a mechanical probe, much like a trolley pole, that would scrape along the bottom of the ice cap to indicate how much clearance the submarine had below the ice. Others included drills supposedly capable of cutting through 13 feet (4 m) of ice to reach fresh air. These innovations were tested only cursorily before the boat put to sea."

Those drills not tested obviously to create an opening for fresh air if indeed the submarine COULD NOT SURFACE WHEN UNDER THE ICE!

I would also ask how exactly the Nautilus would have been able to navigate given the instrumentation and techniques as available at the time? Steering a course to the pole and reaching same with any degree of accuracy was an IMPOSSIBLE?