To the extent that a state of war still exists between the forces of North Korean and United Nations contingents to the south, this blog entry is borderline germane.

Most everyone familiar at least by now with the arrest and execution, most sudden and quick, Jang the uncle [an in-law by marriage] of Kim of North Korea [DPRK].

The brother-in-law of Kim Jong Il [Jang] his arrest done with a flamboyant air, the execution precipitous and unanticipated [?]. 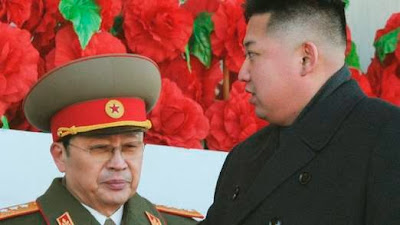 Jang and the nephew during a happier and better time. That uncle now gone and for good!

Kim Jong Un behaving in the ancient and venerable manner of the Oriental despot.

Eliminating in a literal sense any and all opposition, consolidating power in a big time way. Opposition real, potential, or even imaginary.

Please keep in mind that Kim also has two older brothers bypassed for the top job. Continual head-rolling to follow?

Kim acting the manner such as has been the way of monarchs since the time of Alexander of Macedon.

Ruthless and complete purging of all pretenders, again, real, potential and even imaginary.

Alexander [The Great] on assuming the throne his first act of rule to have his uncle [paternal] executed. This of course 2,500 years ago!

A high level North Korean defection, the foremost aide to the late Jang fleeing for his life.
I bet this guy has a lot of secrets to reveal. Big time!

"One of the most powerful men in North Korea is seeking asylum in South Korea after fleeing to China, according to reports."

An aide to the late Jang UNNAMED but knowing his head on the chopping block, escape the only alternative.

As for the two older brothers of Kim be wary! Very wary!