Thanks to RIANovosti and the tip from DEC we have the story of the Russian war dog.

A new breed of war dog unusual as are most things Russian.

The Soviet before them and now the Russian approach to military problems quite often unique and not in keeping with convention.

This is the Russian black terrier.

Red Star kennels mixing a bunch of different breeds to produce the Russian black terrier, now in training for duty with the Russian Army, again a UNIQUE ANIMAL NOT SEEN IN WESTERN DOG-LOVING CIRCLES! For a time even the very existence of this dog was a state secret unknown to the "west"?

"the black Russian terrier, which was produced from a mix of about 20 breeds such as the Giant Schnauzer, the Rottweiler, the Newfoundland and the Caucasian Ovcharka. The breed has been available to Russian pet lovers since the 1950s, though it remains rare outside the country." 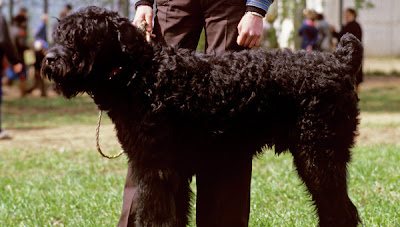 That giant Alsatian dog, the German shepherd always thought to be the ideal war dog able to perform military service in the most desirable manner no longer seen as so perfect?

That malinois breed for instance used by French and now American military units that incorporate dogs into the TO and E.

A major consideration being a canine that if necessary can be picked up and carried by one man, the handler!

This too a consideration with the Russian black terrier?

The Russian and prior to that the Soviet military NEVER slavishly copying or imitating the western model but rather devising their OWN solutions, according to their estimate of the situation and criteria they deem as important.