That latest incident involving "land" and territorial claims in the South China Sea, on this particular occasion just recently, Filipino and Chinese warships [patrol craft] facing off - - the punador [point of honor] being the Scarborough Shoals.

NOT even islands or a land mass but reefs and chunks and bits of rock only visible at low tide off the coast of Luzon, within the limits of what the Filipino claims as an Economic Exclusion Zone [EEZ] but is also claimed by China. 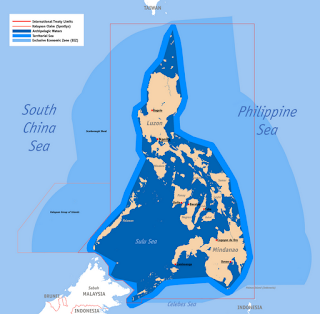 "on April 11, 2012, the Philippine navy stopped and boarded eight Chinese fishing vessels in the shoals. In order to demonstrate that the Chinese fishermen had not been innocently deep-sea fishing in the area, the navy took pictures of one of the crews standing on a pile of giant clams presumably taken from the shoal."

"Scarborough Shoal or Scarborough Reef [more correctly described as a group of rocks or very small islands plus reefs in an atoll shape], rather than as a shoal, is located between the Macclesfield Bank and Luzon Island of the Philippines in the South China Sea"

Scarborough [called different names in Chinese and Tagalog] directly west of Luzon within the Filipino EEZ, a traditional area for Filipino fishing vessels to visit.

NOT islands, islets or a land mass of any type as normally understood, rocks and reefs barely jutting above the water line.

"Several of the rocks or small islands including 'South Rock' are 1/2 m to 3 m high, and many of the reefs are just below water at high tide."

From a number of sources we have info on this incident and the ramifications thereof:

1. "The riddle of the Scarborough Shoals"

"two Chinese Coast Guard vessels popped over the horizon and placed themselves between the Philippine navy cutter and the fishing boats, preventing a seizure of the vessels and crews."

Those nations having competing territorial claims in the South China Sea to include:

Conflicting claims as described by the participants to the disputes to include:

The disputes and potential conflict over the South China Sea a hot button topic at the recent meeting of ASEAN nations. Secretary of State Clinton implored by those ASEAN nations FOR A WIDENING AND MORE PROACTIVE AMERICAN INVOLVEMENT IN THE AREA!!

Those various nations of the South China Sea area hoping  for American intervention of some sort, realizing that individually or even as a group NOT able to counter Chinese power.

"Secretary of State Hillary Clinton said resolving territorial disputes off China’s southern coast is 'a leading diplomatic priority,' signaling her intention to intercede in a region claimed in full by the Chinese government."

3. SSN. That novel by Tom Clancy is now a MUST read. Conflict over the Spratly Islands and territorial dispute in the South China Sea leads to war between the U.S. and China!

"SSN (1996) is a novel created by Tom Clancy and Martin Greenberg following the missions of the U.S. Navy nuclear attack submarine USS Cheyenne (SSN-773) during a fictional war with China over the Spratly Islands"

Is the territorial line here or is it there? Whose claims are more valid, yours or mine? Who has a right to the resources thereof?

Such is the traditional reasons wars are fought. Always has been, always will be!!

Hi, Saw your blog on the Scarborough Shoals after it was referred to me by a Google Alert. Very nice. I have written and been following the dispute in many worldwide land claims. I wrote an article for my Blog on using "lighthouses as sovereignty symbols" http://lighthousememories.ca/2012/04/19/the-lighthouse-as-a-sovereignty-symbol/#.UAvQYxLiYRc I would like to reprint your blog article with proper links and references on my site as a follow-up and addition to mine if you will give permission. Thanks for sonsidering. John Coldwell