Thanks to the tip from National Public Radio [NPR] we have the story of the American entrepreneur offering the experience and "thrill" of driving a military tank.

For a fee the military wannabee can sit at the wheel of a Chieftain and under tutelage and supervision drive the tank through a course and FOR AN ADDITIONAL FEE CRUSH AN AUTOMOBILE. 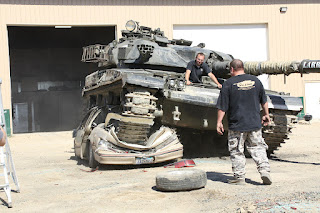 Some would suggest that is something "ONLY in America"?

Or, for an additional fee, fire on a closed range automatic weapons, that light machine gun as was used by American forces during World War Two and Korea.

"Do something different" is not an understatement?

* I would hope that a lot of safety is practiced here. Tanks even during peace time kill or injure a lot of ground troops during maneuvers, even when precautions taken. Those tanks ARE DANGEROUS UNDER ALL CIRCUMSTANCES.

* I hope the owner has a bunch of CONEX with a lot of spare parts. Tanks by nature operate on rough terrain and are very subject to breakdown. Spare parts for these scrapped Chieftains are available? Purchase eight tanks for customers to drive and four more tanks merely for spare parts at your disposal.

* Again, safety should be a major concern! A lot of jostling inside one of those tanks under most circumstances and head gear, a helmet with face protection is a MUST! Ground guides needed when in tight quarters at all times.

* The main guns of these tanks are inoperable. It might be fun to fire the main gun once but consider that the cost thirty years ago each and every time one round was fired from the Chieftain was $3,000 U.S.!!!

* It appears that among the armored tracked vehicles is a British self-propelled gun. Other tracked armored vehicles are available as well! THE AMERICAN MILITARY DOES NOT SELL SCRAP OR OBSOLETE ARMOR TO THE PUBLIC!!

Yet once more, this is type of thing, only in America??