Right now, as we speak, the Syrian city of Aleppo contested between the forces of the despot and the insurgents of the Free Syrian Army.

The situation as of yet without resolution but at least half [50 %] of the city currently reported to be in the hands of those elements in opposition to Assad.

Aleppo described as a city about the size of Los Angeles and THE LARGEST CITY IN SYRIA.

I am not sure if this area or population wise or a combination thereof I would have thought Damascus to have been the largest Syrian city.

Aleppo a city that has existed for at least eight thousand [8,000] years.

Of great significance to the insurgents is the capture of the Citadel?

That most ancient defensive and military structure located in the very center of the city and dating also back to antiquity. 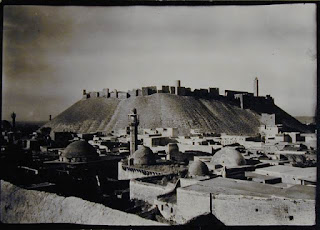 The Citadel in the very center of Aleppo. This image taken some decades ago? That tell is not natural but is for the most part a man-made mound.

A fortification having been on that exact site since 1600 B.C.

The Citadel in the most elaborate and well constructed form during the Crusades.

Over the many centuries:

* Besieged by the Crusaders but not captured!

* Captured by the Mongols.

* Captured by Timur the Lame [Tamerlane].

Damascus for that matter too besieged by the Crusader but not captured!

The Citadel NOW in various stages of rehabilitation and most impressive.

Those areas having undergone reconstruction appearing almost as in the fashion as would have been recognized by a Crusader or Saladin himself?

See here and here web sites devoted to images of the Citadel.

Seeing the flag of the Free Syrian Army flying over the Citadel will be a clear and unmistakable sign that the time of reckoning for Assad is at hand, without question?

The Citadel as with Krak of the Chevaliers to be thought of as NOT merely a military fortress but much more, a city within a city, a haven and refuge, a symbol of ruling power.