"He liked to be in the thick of action"

Here is the sheep! A soldier of the 63rd Royal Navy [RN] division, NOT a naval rating, while in command as a field grade officer during the Ancre engagement, displayed the utmost in courage, bravery and fortitude, being awarded the highest decoration for heroism that the British Empire can bestow, the Victoria Cross [VC]. 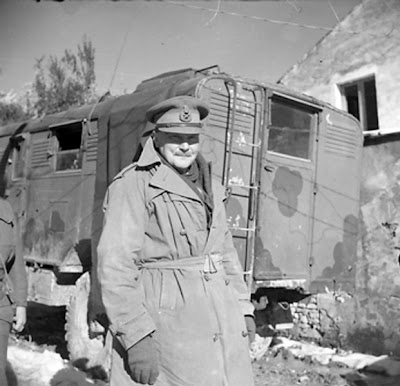 Freyberg, a combat soldier and battalion commander without peer, wounded no less than four times during the attack on Beaucourt, continuing his command role, up-front and leading, heedless of peril!!

"Freyberg was the first soldier on the beach during the Gallipoli Campaign and the youngest general in the British Army during the First World War [ww1], later serving on the Western Front where he was decorated with the Victoria Cross [VC]."

"during the final stages of the Battle of the Somme . . . he so distinguished himself . . . that he was awarded the Victoria Cross [VC]. . . he suffered two wounds, but remained in command and held his ground throughout the day and the following night . . . Though wounded twice more, the second time severely, Freyberg refused to leave the line until he had issued final instructions."

General Freyberg continued his military career in the aftermath of WW1, leading into combat during WW2 a Corps level contingent of soldiers from New Zealand. The combat record of General Freyberg during WW2 is controversial, the Battle of Crete [1941] having been lost to German parachute assault and the New Zealanders being stymied during the assault and campaign to capture Monte Cassino [Italy - - 1944]!