Here with more good stuff from the DEBKAfile.

Iran, seeking means and ways of waging successfully naval war against the U.S. Navy, combining, and possibly already has combined, the latest in technology, ultra-high speed motor boats with ultra-high speed supercavitating torpedoes! Asymmetric technology reminiscent in a way from naval warfare of the pre-Dreadnought era! Tactics from over one hundred years ago, combined with modern technology?

"Iran gets fast sporting powerboat for arming with Russian torpedoes"

"After laying hands on the record-breaking 61.5 mph speedboat . . . the Iranian navy plans to arm it with the reputedly fastest torpedo in the world, the Russian-designed Shkval (Squall), which moves at speeds of 360 kph. debkafile's military sources report Tehran is aiming for a seaborne weapon able to sink a US carrier in the Persian Gulf."

"the Iranians are outfitting the former Bladerunner 51 to lead the Guards navy's fleet of fast boats in attacks on the big American warships and aircraft carriers deployed in these waters."

"It is feared that big warships may prove vulnerable to 'swarming tactics by small boats,' . . . in recent US naval exercises in the Persian Gulf, small boats . . . were beaten down and destroyed by the helicopters mounted on the ships' decks"

The Squall, or presumably the "Hoot", the Iranian reverse-engineered equivalent, able to attain very-high speed underwater, albeit for not very long distances, AND LAUNCHED FROM A SURFACE VESSEL!!

"The VA-111 Shkval (squall) torpedo and its descendants are supercavitating torpedoes developed by the Soviet Union. They are capable of speeds in excess of 200 knots (370 km/h)." 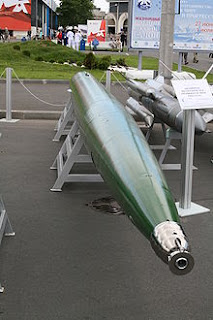 A SWARM of Bladerunner motor launches, approaching an American carrier task force at high speed, each Iranian vessel carrying a pair of Hoot, would present a significant challenge - - hard to stop??

A SWARM of Bladerunner motor launches doing battle with an American carrier task force greatly resembles the threat as posed by the motor-torpedo boat from the pre-Dreadnought era? Prodigious numbers of small naval vessels equipped with torpedoes confounding with NUMBERS alone the much larger battleships of the era [1890's]?? A concept, swarm attack with torpedo boats, a tactic as advocated by the French with the Jeune Ecole doctrine!!

[in the pre-dreadnought era, the destroyer with rapid-firing guns and searchlights was developed to counter the motor-torpedo boat [MTB]! Swarms of MTB attacking during hours of darkness were considered a very severe threat to the battleships of the era!]

Good luck U.S. Navy! Helicopters and naval gunfire will be adequate to stymie the Bladerunner/Hoot combination? Let us hope we never have to find out.