"Following the war, Voigt's experience in tailless aircraft design was put to use by the Chance Vought company in the United States, where he was involved in the design of the F7U Cutlass fighter."

That era immediately following the end of the Second World war experimental jet-powered aircraft of all shapes and sizes the rage. Designs cutting-edge as they say flying such warplanes also fraught with great danger. Especially for the naval aviation pilots. 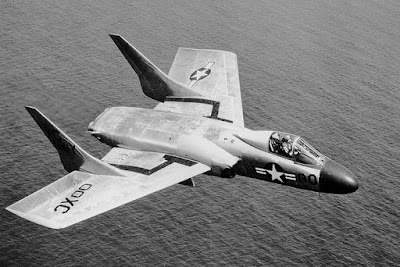 "The Vought F7U Cutlass was a United States Navy carrier-based jet fighter and fighter-bomber of the early Cold War era. It was a tailless aircraft based on aerodynamic data and plans captured from the German Arado company at the end of World War II, though Vought designers denied any link to the German research at the time"

1. Read from the wiki entry a listing of crashes, accident, and mishaps as deemed, involving the F7U. Naval aviation in an era of ferment.

2. Read from the wiki the entry for the Messerschmitt P 1110. tailless warplane.

3. Read further from the wiki entry for the Messerschmitt P 1112 tailless warplane.

From the Luft46 Internet web site I can find among the German Arado designs only the Arado Ar E.555-3 as having the slightest similarity to the F7U. So what are to make of all this?