Place this one in the strange but true category!

Is it a prank? Is it a desecration? Is it vandalism? I am not sure.

Desecration of war memorials quite a common occurrence in many nations. Motivations of the perpetrators not even clear and probably never will be.

"According to a report by the Moscow Times, pranksters in Bulgaria are repainting Soviet-era monuments so that Soviet military heroes look like American Superheroes. Needless to say, the Russians are not too happy about it: 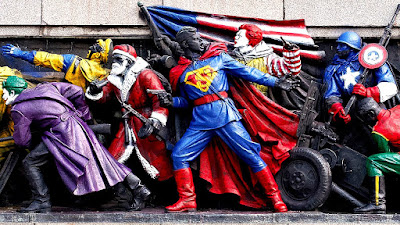 "Russia is demanding that Bulgaria try harder to prevent vandalism of Soviet monuments, after yet another monument to Soviet troops in Sofia was spray-painted, ITAR-Tass reported."

This is hardly vandalism or desecration as I understand the common, ordinary and normal definition of those words to mean? A prank probably is more accurate a description but out of place? Superman, Ronald McDonald, the American flag, Santa Claus. Figures are originally done Soviet soldiers of the Great Patriotic War [WW2] liberating Bulgaria from fascist occupation.

NOW cartoon characters? Who would ever have believed it. To paint that memorial in such a fashion too was a rather protracted affair, not done at a whim and in an instant the work apparently of professionals?