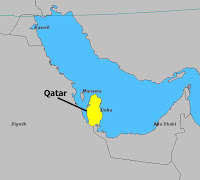 From the latest edition of the DEBKAfile news letter this item which is confusing to me:

"Plans to speed up the transfer of the big US CENTCOM base in Qatar to Saudi Arabia were approved by President Donald Trump and the Saudi Crown Prince Muhamed bin Salman when they met at the White House on Tuesday, March 20. This is an earthshaking event for the Middle East, which far transcends US-Saudi relations,. . . despite repeated denials, the Trump administration is in the process of another momentous move, packing up its air force and quitting Incirlik in southern Turkey, the biggest air base in the region."

"The two moves are interconnected. Turkish President Tayyip Erdogan has become an avid supporter of the Emir of Qatar, Tamim bin Hamad Al Thani, who is locked in a feud with the Saudi rulers. Turkey recently established a large military base in the oil emirate. The Saudi Crown Prince and his ally, the UAE ruler Sheikh Zayed bin Sultan Al-Nahyan, are close friends and President Trump's leading allies in the Gulf region."

Quit Incirlik and remove all American atomic weapons from the area! That easy to understand.

Relinquish the Al-Udeid airbase and transfer to Saudi without the permission of Qatar and the ruling Emir I cannot understand. Qatar at loggerheads with the Saudi. Saudi presence on sovereign territory of the Qatari not welcome? What is this?