As devoted readers to the blog are well aware, I am always on the look-out for this type of stuff.

The Browning Automatic Rifle. The BEST [as used by American forces] small-arms weapon in the Korean War?

"In his study of infantry weapons in Korea, historian S.L.A. Marshall interviewed hundreds of officers and men in after-action reports on the effectiveness of various U.S. small arms in the conflict. General Marshall's report noted that an overwhelming majority of respondents praised the BAR and the utility of automatic fire delivered by a lightweight, portable small arm in both day and night engagements. In his autobiography Colonel David Hackworth praised the BAR as 'the best weapon of the Korean War'"

"A typical BAR gunner of the Korean War carried the twelve-magazine belt and combat suspenders, with three or four extra magazines in pockets. Extra canteens, .45 pistol, grenades, and a flak vest added still more weight. As in World War II, many BAR gunners [in Korea] disposed of the heavy bipod . . .  but unlike the prior conflict the flash hider was always retained because of its utility in night fighting."

"The large amounts of ammunition expended by BAR teams in Korea placed additional demands on the assistant gunner to stay in close contact with the BAR at all times, particularly on patrols. While the BAR magazines themselves always seemed to be in short supply, Gen. Marshall reported that 'riflemen in the squad were markedly willing to carry extra ammunition for the BAR man'." 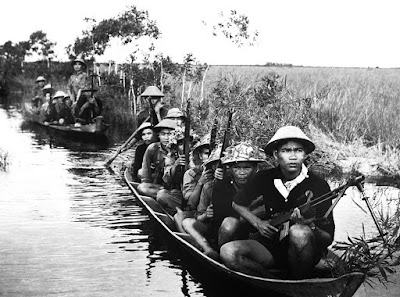 Found this image quite by accident. Viet Cong patrol during the Second Indo-China War. Lead man in the canoe carrying a BAR. A fully loaded BAR with bipod weighing slightly over twenty pounds. Consider that the average Vietnamese man smaller than the average size American woman. Apparently stature or size of the shooter be no impediment to effective use of the BAR!