One by sea, six by land. Belt and Road China style.

As is germane to several prior blog entries, the Seychelles, the Maldives, String of Pearls, vicinity the Indian Ocean and environs.

"MOSCOW (Sputnik) Tommy Yang - Amid growing rivalry between Beijing and New Delhi in the Indian Ocean, China is not likely to overtake India in naval strength in the region in the next two-three decades, despite increasing presence of the Chinese navy and planned new Chinese naval bases, experts told Sputnik."

"China first revealed its plan to build its first overseas naval base in Djibouti in 2016. As a focal point of the Belt and Road Initiative, championed by Chinese President Xi Jinping to boost the nation’s global influence, Pakistan’s ports on the Indian Ocean are widely expected to host a new Chinese military base in the near future." 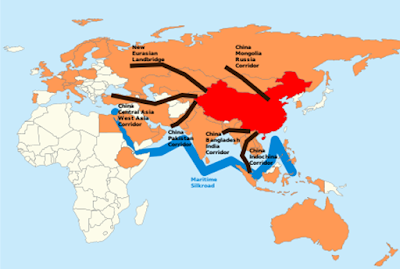 Belt and Road. That in blue the sea route guaranteed and guarded by String of Pearls strategy. India bypassed. Click on image to see a larger view. Thanks to the image by Lommes

Great Power politics and machinations in the ancient and venerable manner. By the year 2030 those economies of India and China slated to be the two largest in the world!