"Anyone who has ever looked into the glazed eyes of a soldier dying on the battlefield will think hard before starting a war." - - Bismarck.

Yet one more instance of shock and awe.

From that era of the Franco-Prussian War, 1870.

"The Battle of Gravelotte (or Gravelotte–St. Privat) on 18 August 1870 was the largest battle during the Franco–Prussian War, named after Gravelotte, a village in Lorraine between Metz and the former French–German frontier"

"The casualties were severe, especially for the attacking Prussian forces. Casualties for the Prussians were 20,163 troops killed, wounded or missing in action during the 18 August battle."

The Prussian infantry in tightly bunched and packed formation attempting to cross an open, long and wide expanse of terrain and close with their French adversary.

Those Frenchmen occupying breastworks and firing single-shot breech-loaded rifles [chassepot].
Extreme advantage to the defender and extreme disadvantage to the Prussian. 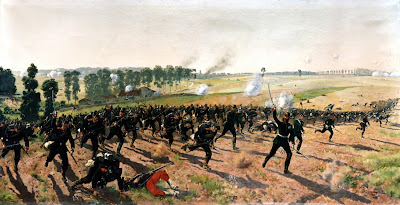 An artist rendition and probably quite accurate portrayal of what would have seen at Gravelotte/St. Privat. Anyone care to join in? Click on image to see an enlarged view.

In addition according to my information [the wiki entry does not confirm] ONE DAY EARLIER [?] the situation even worse for the Prussian.

Again the frontal assault [Mars La-Tour] across that open expanse of terrain and once more staggering casualty figures.

The Prussian Guards losing 5,000 dead in FIFTEEN MINUTES!! That Prussian Guard the finest enlisted troops of the highest quality and as commanded by officers of noble rank.

In BOTH CASES objective not gained, mission a total failure.

NO ONE ever said war was easy but this all seems outrageous. Seems like no one able to receive and understand the message DO NOT ATTACK IN THIS MANNER!.

I hate to sound glib but when you consider from just those two battles alone the killed-in-action [KIA] and wounded-in-action [WIA] as compared to all of Afghan and Iraq the latter seeminbgly almost like a gala event in comparison, doesn't it?