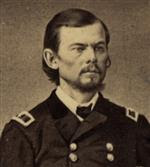 "Rude Comments about Some Major Generals in Blue"

• "Franz Sigel, '. . . in point of theoretical education, is far above the average of commanders in this country. He has studied with great care the science of strategy, and seems thoroughly conversant with the campaigns of all the great captains, so far as covers their main strategic features, and also seems familiar with the duties of the staff, but in tactics, great and small logistics, and discipline he is greatly deficient. These defects are so apparent as to make it absolutely impossible for him to gain the confidence of American officers and men, and entirely unfit him for a high command in our Army.'" -- Brig. Gen. John M. Schofield, Feb. 12, 1862.

See previous blog entries regarding the "Forty-Eighters" and the contribution of distinct German-speaking units to the Federal cause during the American Civil War:

My thought has always been that those distinct German-speaking units of the Union army as commanded by officers also native German speakers, commanders and enlisted both having trained in the German tradition would have shown some marked fighting capacity on the battlefields of the American Civil War better than average. THIS HOWEVER DOES NOT SEEM TO BE THE CASE! Good yes, but nothing more than that.