From Strategy Page this recent item, the Israeli acknowledging a secret weapon that has been in existence for some time.

"August 3, 2015: In June 2015 Israel declassified the fact that in the 1980s, as it began replacing its 500 American M48 and M60 tanks with the locally made Merkava, several dozen of the M60s were converted to ATGM (anti-tank guided missiles) carriers. These vehicles were called Pereh and looked like a regular M60. But the 105mm gun was a fake and the rear of the turret . . . which normally contained 105mm ammo, electronics and some mechanical gear actually carried twelve Spike ATGMs."

This is Pereh! An armored carrier for the Spike anti-tank guided-missile [ATGM].

The main gun now inoperable. THIS IS NOT A TANK! That apparatus at the rear of the turret contains twelve ATGM. Height allows for an over-watch position to be occupied with the vehicle in a hull-down position. Relatively impervious to direct and indirect enemy weapons fire.

"Pereh would seek high ground and watch over the advance of gun-armed tanks below. Pereh could quickly supply a lot of additional firepower for any of the gun armed tanks that encountered a lot of resistance."

This is combined arms as it is supposed to be done. 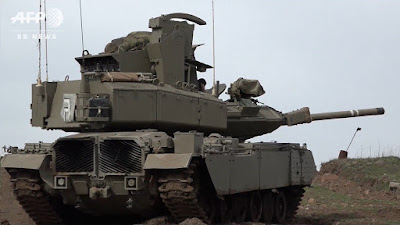 Yet one more image of the Pereh. That main gun again inoperable. This is a heavily modified American M-48 or M-60 tank, the ATGM apparatus mounted on top of the turret.

The superior reputation of Israeli ordnance to modify most successfully an existing or outmoded weapons system undiminished.