The United States Air Force Academy [USAFA] back in the news again.

Dispute as had been the case once previously, the accusation of excessive religiosity and NOW "revolt" so called.

"The leader of a church-state separatist group says that there’s a 'revolt' underway at the U.S. Air Force Academy in Colorado Springs, Colo., after officials there removed a Bible verse from a white board outside a cadet’s bedroom door following complaints that its presence was offensive." 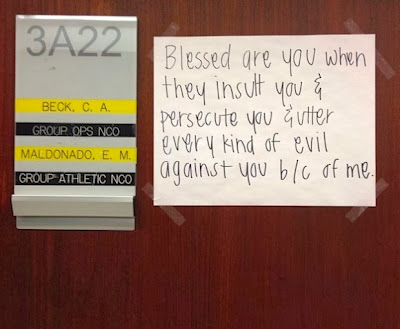 This is an Islamic scriptural verse as posted on a whiteboard at the USAFA.

From a variety of faiths. NOT MERELY BIBLE VERSES. Was Bible verses originally but has morphed into much more than that in "protest".

Freedom of religion does not mean FREEDOM FROM RELIGION.

"Revolt" as meaning a mutiny? A collective disobedience to orders? NOT so the case here.

These whiteboards are legal and postings can be made at the discretion of the owner?

The U.S. military OUGHT TO BE GLAD THAT SERVICEMEN HAVE A RELIGIOUS FOUNDATION AND TAKE THEIR FAITH SERIOUSLY. Moral virtue should be a military virtue. Or am I being too much of a Boy Scout about this?

This was also an episode from a few years ago when the graduating head of the cadets posted a blanket e-mail to the student boy at USAFA, a serious of motivating quotations that DID INCLUDE SOME religious admonitions and exhortations. From what I read NOT so sinister or so predominantly so Biblical based.

You the devoted reader to the blog need to go to the Blaze and see all the whiteboard postings for yourself.

Let me also predict what the response of the USAFA will be. Removal of all  whiteboards mandated as a measure to prevent postings of ANY KIND. You wait and see.