Here is one I had more or less forgotten about.

ONLY vaguely remember from a long time ago.

A very early version of the combat drone.

EXPENDABLE! And seems to be for a period of time a more or less unqualified success.

Anti-submarine warfare [ASW] drone in an era when the U.S. Navy wanted all ships to have an ASW capability AND also an organic aviation presence of some sort. EVERY warship an aircraft carrier to some extent! 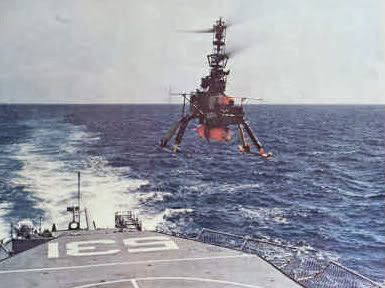 Hard to tell if that is a torpedo or a nuclear depth charge slung underneath the DASH.

"The Gyrodyne QH-50 DASH (Drone Anti-Submarine Helicopter) was a small, drone helicopter built by Gyrodyne Company of America for use as a long-range anti-submarine weapon on ships that would otherwise be too small to operate a full-sized helicopter." 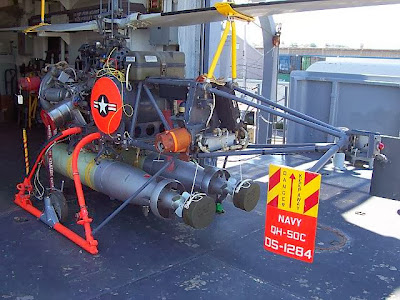 DASH is a simple itty-bitty but effective machine, here with an image so that some sort of scale can be seen. Two torpedoes slung underneath. The other counter-rotating rotor however cannot be seen.

DASH flown in all sorts of bad weather and rough seas way beyond the levels as mandated for safe manned helicopter operations. Again,  too, was EXPENDABLE!

One operator dedicated for take-off and landing and a second operator for in-flight maneuver and delivery of weaponry.

"DASH's control scheme had two controllers, one on the flight deck, and another in the combat information center. The flight-deck controller would handle take-off and landing. The controller in the Combat Information Center (CIC) would fly DASH to the target's location and release weapons using semi automated controls and radar."

Micro-miniaturized and computer controlled devices not available at the time yet DASH a more or less unqualified success? Impressive.

Relatively cheap and an expedient means of providing wide-spread long-range ASW for the ENTIRE fleet.