"This is not the end, it is not even the beginning of the end. But it is, perhaps, the end of the beginning." - - Churchill.

That victory of the British Eighth Army under Montgomery at El Alamein the significance within the context of Singapore, Tobruk, Dieppe and the Channel Dash cannot be over estimated.

Montgomery too in the aftermath of the battle [correctly called the Second Battle of El Alamein] a HERO deserved of adulation. The man as a commander DID succeed where others did not.

Bernard Law Montgomery most controversial from that period of World War Two [WW2] and best understood as a very capable and very able combat commander but in light of Goodwood, Market Garden and the failure to clear the Scheldt Estuary in an expeditious manner not so absolutely spectacular? 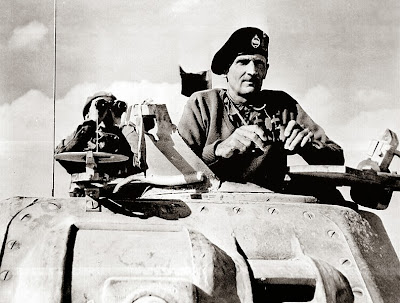 Need I say here who Montgomery is? The man did have a sense of image and was able to cultivate same and do so with panache'! Sir John Keegan of the opinion that those most successful military commanders able to use theatrics to their advantage. As was Bernard Law Montgomery.

Montgomery was made of stern stuff this assuredly so! A commander in a manner as would have been approved of by Sun Tzu from twenty-five hundred years earlier?

From the David Irving book "The War Between The Generals" Chapter 14 "Lord Mighty in Battle" this exchange between Churchill and Montgomery:

"'I understand , sir,' he said, 'that you want to discuss with my staff the proportion of soldiers to vehicles landing on the beaches . . . I cannot allow you to do so. My staff advises me and I given the final decision. They then do what I tell them. That final decision has been given. In any case I could never allow you to harass my staff at this time and possibly shake their confidence in me . . .'" - - B. L. Montgomery.

"Having once received His Majesty's commission to be general of his forces, there are certain commands of His Majesty which, acting in that capacity, I am unable to accept." - - Sun Tzu.

Montgomery understanding full well the role of the commander in war time, the chain of command and the proper authority to make military decisions NOT within the purview of the political authority.

ALMOST!  IN the aftermath of El Alamein the Dodecanese Campaign an English failure.