Yet one more instance of Soviet amphibious operation vicinity Crimea and Kerch during that period of the Great Patriotic War [WW2]. 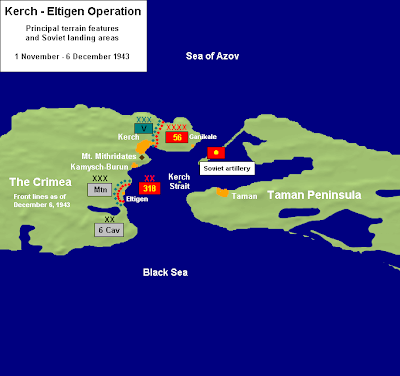 Sea of Azov to the north, Black Sea to the south. For some sense of scale that approximate distance in miles from Taman Russian Federation to Kerch Ukraine in a straight line is 15 miles or 24.14 Kilometers

"In the face of strong German reinforcements, the Soviets contented themselves with reinforcing the Yenikale Beachhead . . . Although the Germans succeeded in initially defending the Crimea against the Soviet landings, the successful landing near Kerch placed the Soviets in a solid position from which to liberate the entire Crimea from Nazi occupation, an operation they successfully concluded in May 1944."

Soviet forces on this occasion more successful than had been the case in 1941. Albeit with difficulty one of the two beachheads ultimately expanded, German forces forced to withdraw. If anything, give the Soviet Red Army a lot of credit for persistence and tenacity.

And for those devoted readers to the blog that are graduates of the Command & General Staff school or the War College this question I raise.

Is this [Kerch] an amphibious operation as that term generally, commonly, and ordinarily understood?

When exactly [if so] does a river crossing end and an amphibious operation start?

The crossing of the Rhine, the Irrawaddy, Strait of Messina, the Scheldt Estuary or the Kerch Strait each also from that period of WW2 an amphibious operations as defined?

Someone knows the answer to this question?