Before there was Long Range Desert Group [LRDG] and Auto Saharan there was Light Car Patrol [LCP]!

And aspect of the Great War [WW1], another side show of a side show! The Senussi Campaign and the use of motorized fighting combat vehicles in the hostile terrain of the Sahara the use of automobiles as adapted for desert warfare pioneered by the British.

Automobiles comprising what was called the Light Car Patrol [LCP].

This is the television series "Rat Patrol" but from a much earlier war [WW1] and true to life, not make believe Hollywood! The rudimentary means, methods and techniques for crossing the Sahara with motorized transport and navigation of the trackless expanses having been worked out in advance by the British archaeologist Dr. John Ball.

"The LCP patrols operated in modified Ford Model T's armed with Lewis machine guns. Other modifications included 3 1/2 inch wide desert tires, radiator condensers mounted on the running boards, and primitive sun compasses on the dashboard. Most of these adaptions were the brain child of the fifty year old British archaeologist and desert explorer, Dr. John Ball. Ball who had been working in the Government Survey Office in Cairo at the time." 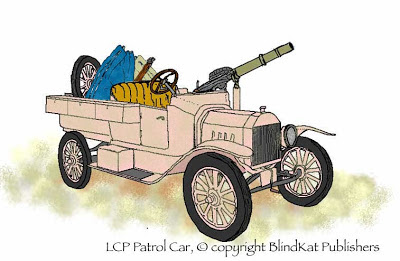 Yet once more the Senussi Campaign of the Great War a side show of a side show, the Senussi desert nomad a wandering and adept guerrilla army defeated in large measure to the efforts of the LCP.

"The Senussi Campaign took place in north Africa, from November 1915 to February 1917 during the First World War. The combatants were the British Empire, Italy and the Senussi, a religious sect composed of tribesmen based in Libya, supported by the Ottoman Empire and the German Empire."

Those Senussi tribesmen guerrilla fighters during WW1 in league with the Central Powers and in opposition to the Italian colonial occupier.

Those Senussi tribesmen guerrilla fighters during the Second World War [WW2] in league with the allies and in opposition to the Axis forces.

I am actually quite surprised that the Ford Model T as adapted for desert warfare of the Great War era was able to function in so able a manner as it it presumed to have done. Automotive technology for the most part was still in the infancy stage and civilian "cars" were noted for breaking down on an almost clockwork basis, these Ford products performing it would seem however in a pretty good fashion terrain and climate notwithstanding.