Thanks to National Public Radio [NPR] we have some info on the Chinese aircraft carrier, now seaworthy, able to steam and also too capable of launching and recovering warplanes.

"China has just joined an exclusive global club with the launch of its first aircraft carrier. David Greene talks to naval historian and defense analyst Paul Beaver about the new Chinese aircraft carrier that has just entered service in China's navy." 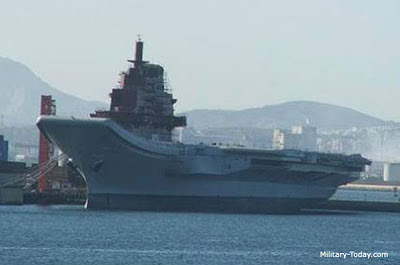 That Liaoning originally the Varyag, a hulk that was TOWED from the Black Sea to a Chinese dockyard and shipbuilding facility, finally fitted with engines and further accoutrements as needed by a modern warship.

The purpose of the Liaoning at this specific moment to allow the Chinese to gain experience with big ship handling, air crews practicing take-off and landing from ground facilities, naval aviators in preparation for carrier operations in pelagic [deep] waters!!


That warplane most suited for the ski-slope jump-jet type of deck the Sukhoi Su-33!! These aircraft are currently in the Chinese inventory in what numbers? Helicopters of course also able to be accommodated by the Liaoning.

"The Varyag [Liaoning] is capable of operating a mixed air wing of 50 fixed-wing aircraft and helicopters. In 2006 it was reported that China ordered two Russian Su-33 carrier-based naval fighters for trials and evaluation. Delivery was expected in 2007-2008. There is also an agreed option for anther 12 - 48 of the Su-33s."