A combat commander most controversial the record of which tarnished his reputation not fully resolved even by historians many decades later.

1. Commanded the American 92nd Division during the Italian Campaign. All black unit [called "colored troops" at the time]. White officers in charge of negro enlisted. Such was the case of the American racially segregated military during that period.

That 92nd Division unfortunately under close scrutiny at all times, the "Buffalo" division as it was called not performing to standard so was the perception of some, Almond not able to motivate his charges with the proper zeal many have thought.

[certain persons strongly WANTED AND IN A PERVERSE MANNER that 92nd Division to fail and nitpicked any failure as a sign of general overall ineptitude! Such nitpicking and criticism could be made the case for ALMOST ALL AMERICAN COMBAT UNITS DURING WW2?]

2. General Almond in the aftermath of WW2 occupying staff positions at ever higher levels of echelon and finally given combat command of the American Tenth Corps [X] prior to the Inchon landings during the Korean War [1950].

That Inchon landing a success, the North Korean People's Army [NKPA] in full retreat, Almond and the X given the assignment of another amphibious operation, landing on the east coast of Korea and moving north to the Yalu in pursuit of retreating NKPA elements. 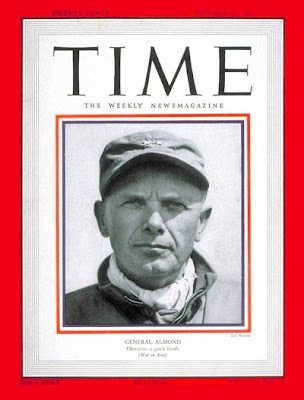 Here the Time magazine cover from October 1950. Almond at the command of X Corps a hero. ONLY ONE MONTH later with Chinese intervention the same man now the goat! Such is the fickleness and irony of events as they occur!!

The rest is history as they say. X Corps attacked by overwhelming numbers of Chinese Communist troops, that X Corps almost annihilated, evacuation by sea, the same route from whence they came being the only resort.

Almond in the aftermath of X Corps defeat his performance seeming to be lackluster, out-of-touch, poor. The animosity existing at the time between the Marine commander O.P. Smith and Almond most clear and apparent.

As I have said, even the historians many decades later have not sorted the whole issue out. Devoted readers to the blog have their own opinion? Comments welcome.

General Almond typifies what is wrong with the American Military. He proved to be unfit for command. He rose through the officer ranks due to sucking up to his superiors and not by any objective merit. This is because of the FITNESS REPORT system of promotion.

Briefly how to improve the US military officer corps and military:

1) Stop Fitness REPORTS.
2) Form a GENERAL STAFF SYSTEM modeled on the pre-end of WWII German General Staff.
3) Stop Up-Or Out system, competent may stay in grade.
4) Objective tests of officers to determine what they know every 4 years.
5) Allow mistakes--now a mistake is generally career ending.
6) Split officers into career groups:
a) General Staff (includes all branches, Army, Navy, Air Force, Marines).
b) Operations ( command)
c) Logistics
d) Education (General Staff may rotate here)
7) All pre-service academy candidates serve in combat (enlisted) companies for two years.
8) No women in the military except as auxiliaries, e.g. WAVES, WACS, to show that the U.S. Military is a serious WAR machine.
9) Strict promotion by MERIT.
10) Vastly pare down numbers of Officers, commissioned and non-commissioned but especially commissioned ones.
11) Dissuade enlisted careers with families. Most enlisted serve 6 years and then enter some form of reserve for 20 years. When out of the enlistment the family formation may ensue.
12) End policing the world.