And then there was AUTONOMOUS?

This does sound like Skynet without the self-replicating capability of the drones, at least not YET!

Thanks to PRESSTV we have the latest on American drone development: 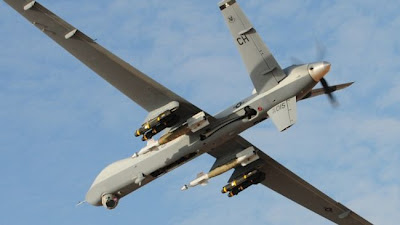 This appears to be a Reaper drone carrying Hellfire missiles and several Paveway precision-guided-munition. A mix of such ordnance task tailored for the specific mission


"The US Defense Department will soon be equipped with new unmanned aerial vehicles that will operate more 'autonomously' at a greater pace."

"The Pentagon is reportedly investing heavily in the new smarter robotic weapons that will get rid of their remote operators on the ground to work virtually without human intervention and with minimum supervision."

Skynet of course from the Terminator series of movies starring Arnold and directed by James Cameron. Robot war-fighting machines become sentient and decide to destroy mankind and do a pretty good job of doing so. After becoming self-replicating the machines go about their business AUTONOMOUSLY WITHOUT HUMAN INTERVENTION OR CONTROL, AS PROGRAMMED!!

"Skynet is a fictional, self-aware artificial intelligence system . . . Skynet's operations are almost exclusively performed by war-machines, cyborgs (usually a Terminator), and other computer systems, with its ultimate goal the extinction of the human race."

NOT yet, but headed in the right direction?