Thanks to Steve for the lead in to this blog entry.

A formidable fortification, built on the grand scale, the LARGEST FORTRESS IN THE WESTERN HEMISPHERE.

[built on a very grand scale. Has the appearance of a Crusader castle such as Krak of the Chevaliers. Built almost 700 years later, however!] 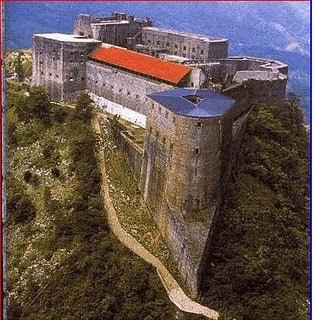 Designed by a pair of French architects, constructed in the aftermath of Haitian independence from French colonial rule, the Citadel a refuge of last-resort, a symbol of resistance and defiance, a structure of which seems impregnable against any and all attack!

"The Citadelle Laferrière or, Citadelle Henry Christophe, or simply the Citadelle (in English, spelled Citadel), is a large mountaintop fortress located in northern Haiti . . . It is the largest fortress in the Americas"

"Large cisterns and storehouses in the fortress's interior were designed to store enough food and water for 5,000 defenders for up to one year. The fortress included palace quarters for the king and his family . . . The Citadel's appearance . . . has been likened to the prow of a great stone ship" 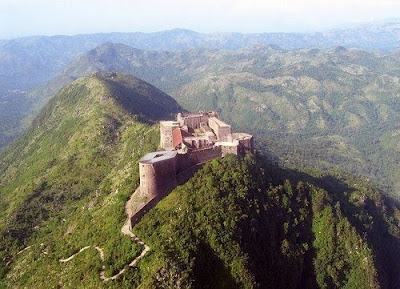 The Citadel in some ways is reminiscent of Masada, Israel. A last-stand refuge, a fortification of such formidable character that ONLY a prolonged [years?] and difficult siege could EVER hope to defeat any defender occupying the Citadel. Indeed, modern day tourists trekking to the Citadel are told to bring their own water, and lots of it!

The Citadel was NEVER occupied during a time of war or EVER subjected to attack. I can only take look at the terrain and assume that a ONLY protracted siege of years, accompanied by a constant bombardment of heavy artillery would have been required to reduce the fortification and compel the surrender of those inside! Even sapping and mining in the old-fashioned manner would have been futile, the Citadel seems to have been built to a large extent on solid rock?

Saying that the citadelle was built by frenchmen is like saying Toussaint Louverture, Haitis founder, was a great french general, which ironically is what the french are now claiming. Give credit where its due. For the record, the citadelle was designed by a Haitian engineer named Etienne Henri Barre. Go checck it!

This fortress was probably aimed against the native population. It was situated inland away from important lines of communication, but covered the king's palace and had provisions for him and his army. Its design also suggests that it was not intended to resist artillery fire; the comparison to a Crusader castle is right, i.e. it was an obsolete design for facing a modern field army, but quite efficient for fighting a large force of light infantry.

Haiti could not have resisted a French invasion which is why they shortly after paid a large indemnity for French recognition of their independence. What the king needed was to secure his rule against rivals in Haiti, who had proved much more effective at killing its rulers than the French.

French had nothing to do with it's stop that eurocentric garbage