Here is an instance of an American warship being use for diplomacy purposes.

An American destroyer, the USS Murphy, while on diplomatic mission, ferrying to-and-fro the King of Saudi Arabia, the Murphy becoming a floating palace, an impromptu "1001 Arabian Nights" of unexpected and surprising proportions, complete with menagerie and slaughterhouse.

"Sailor was the piper of history"

"The meeting between President Franklin Delano Roosevelt and King Abdulaziz in 1945 was made possible by the use of two US Navy warships." The - - USS Quincy and the USS Murphy.

King Abdulaziz ibn Saud, a man living in the traditional manner of the eastern despot and potentate, desiring a meeting with President Roosevelt, is obliged by the U.S. Navy, a destroyer being placed at the disposal of the King, living space provided to the king aboard ship found to be inadequate, culturally unsuited and insensitive for the monarch, a desert dweller of the Arabian peninsula at that!

The King, traveling with an entourage of forty-nine retainers to include cooks, bodyguards, cryptographer, food taster, assorted menials, etc.

The King, bringing his own fresh supply of food, including live sheep, necessitating the construction of a corral, pen and slaughterhouse aboard ship.

"eight live sheep the 49-strong contingent brought aboard - - In addition to the sheep, the king brought along several 100-pound bags of rice and a bountiful harvest of watermelons and tomatoes."

"The ship's crew built a corral at the stern for the small flock [of sheep] . . . [and were] cooked atop charcoal pots on deck."

"He [the King] wouldn't have a sip of anything or a thing to eat unless one of his tasters checked it out."

The King, DISSATISFIED WITH QUARTERS AS PROVIDED IN THE INTERIOR OF THE SHIP, having an expedient tent of major proportions erected on the bow of the ship, resembling the desert palace as favored and used by the nomadic and highly mobile Bedouin.

The King - - even unwilling to have his shod foot trod on the steel deck of the destroyer!

"Persian carpets servants rolled out everywhere the king stepped so he would not set foot on the ship's deck." 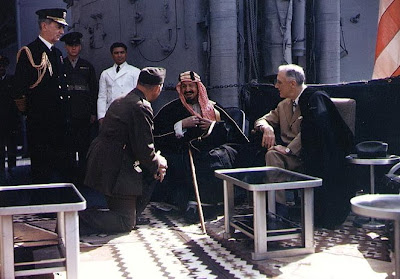 A picture of the King meeting with President Roosevelt. Note the carpets covering the metal deck of the ship. That man on bended knee with his back to the camera is the American interpreter, a full-bird Colonel!

The King was however, a generous man, handsomely rewarding the entire ships' crew for a fine effort. And an effort that will never be forgotten. Even more than sixty years later!!