Well, of course, aren't they all?!

Thanks in both instances here to the Chicago Tribune and the Globe and Mail!

Back on 18 October, this raid by the FBI created a mild stir:

"FBI raid in U.S. heartland may have Canadian connection"

FBI and other federal agents, in significant numbers, raiding a sheep and goat ranch [?] in Kinsman, IL. Kinsman, a sleepy little hamlet, about 100 persons, woken up by an influx of "outsiders", armed to the teeth, feds with a purpose in mind, at the time, exactly what not being totally not clear.

A sheep and goat ranch and halal slaughter house, critters killed in the Islamic manner, ritually being rendered suitable for consumption by the faithful! 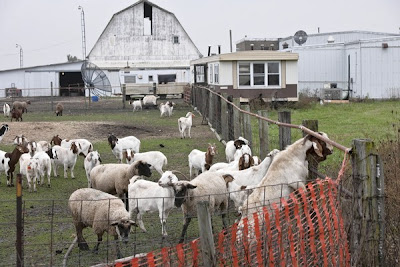 The purpose of the FBI raid now more clear!


Persons plotting a jihad attack against the Jylands Posten newspaper in Denmark, conspirators run to ground after being observed doing a recce [reconnaissance, several of them]! Persons with MORE than mere aspirations! Jihadists [?] with murder in their hearts, thwarted by law enforcement!

The accused being David Coleman Headley [a/k/a Daood Gilani] and Tahawwur Hussain Rana. Daood and his friend Rana, best friends, having both been students previously at a most prestigious Pakistani military prep school!

"Headley, who changed his name from Daood Gilani in 2006, allegedly to avoid raising red flags when he traveled, was charged with conspiracy to commit terrorist acts. Rana, 48, was accused of financially supporting Headley, arranging his overseas travel and discussing potential targets with him."

"Headley was to attack the Jyllands-Posten office or launch a more focused attempt at killing cartoonist Kurt Westergaard and an editor there."

Attack and kill the cartoonist and the editor of the newspaper in Denmark who published the cartoons so offensive to Muslims worldwide.

Pre-emption worked here? One guy is freely talking now? Caught up in a situation for which there is no remediation!

I hope they will get what they deserve! From what they assume their religion is approved to dictate what can or cannot be written or drawn?! There is absolutely no way the freedom of speech is going to make an exception just to comfort some insane heads. But if they feel so allowed to plan a plot to kill people because of their stupid rules they feel obliged to obey then they should be treated the same way they wanted to treat the innocent people overseas. Ella