Never seen anything like this before. Multiple-launch rocket artillery as used during the Second World War [WW2] and mounted to a tank.

"The Rocket Launcher T34 (Calliope) was a tank-mounted multiple rocket launcher used by the United States Army during World War II. The launcher was placed atop the Medium Tank M4, and fired a barrage of 4.5 in (114 mm) M8 rockets from 60 launch tubes. It was developed in 1943; small numbers were produced and were used by various US armor units in 1944-45." 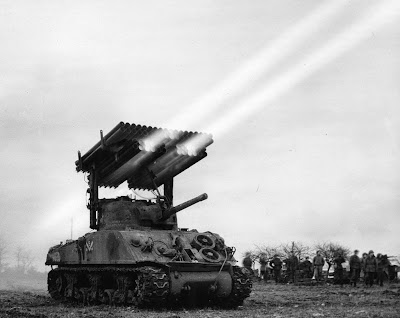 This contraption what I call it is a response to counter-battery, counter-mortar, counter-rocket artillery fire?

That firing location of rocket artillery in particular very easy to locate, that amount of smoke as emitted by a barrage of rockets immense.

Protection for the firing unit pretty substantial, only a direct hit on the tank sufficing to do damage.