One hundred years ago that assassination of Archduke Franz Ferdinand and his wife Sophie having set into action a chain of events that resulted in the First World War.

1. "Bosnia and WW1: The living legacy of Gavrilo Princip"

"Tourists, historians and diplomats have been arriving in Sarajevo to commemorate the shots fired by a young Bosnian Serb assassin on 28 June 1914 - shots that sparked World War One. But the city and country are uneasy in the historical spotlight, as the tensions behind those events are still alive today.
Gavrilo Princip fired twice at close range into the open-topped car carrying the heir to the throne of the Austro-Hungarian Empire, Franz Ferdinand, and his wife Sophie. He could hardly miss - two of the bullets found their targets and the royal couple were killed." 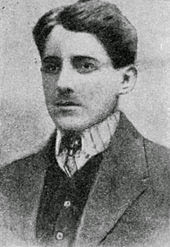 This particular drawing of Gavrilo does a degree more justice than some of the photographs I have seen. The man was not impressive by any measure, only nineteen at the time of the crime, a fervent nationalist and zealot, although somewhat shiftless and unaccomplished. There is a certain commonality between Gavrilo and the American assassin Lee Harvey Oswald?
2. "First World War 100 years on"

"For one half of the city, he was the national hero who fought against imperial oppression and fully deserves a new park in his name. For the other half he is a villain who killed a pregnant woman and brought a flourishing epoque to an end."

"Gavrilo Princip, the Bosnian-Serb radical who set in train a chain of events that led to the outbreak of the first world war will be the central figure in Sarajevo this weekend as the city marks 100 years since he assassinated Archduke Franz Ferdinand in 1914."