Those ISIL fighters prominently flying the black flag beloved of the Salafi.

It is reputed that Mohammad flew a black flag into battle, inscribed with the Islamic testament of faith: "There is no God but Allah and Mohammad is his Prophet".

"The Black Banner or Black Standard also known as rayat al-`uqab "banner of the eagle" or simply as  al-raya "the banner") is one of the flags flown by the prophet Muhammad in Islamic religion, an eschatological symbol in Shi'a Islam (heralding the advent of the Mahdi), and a symbol used in Islamism and Jihadism" 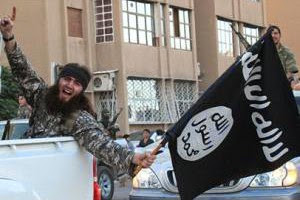 ISIL fighter waving the black flag.
"A black flag with the shahada inscribed in white was spotted on Jihadist websites from at least 2001. Even though the historical black banner did not have any inscription, this variant is commonly known as al-raya "the banner" or rayat al-`uqab "banner of the eagle" after the hadith tradition, and has been dubbed the black flag of jihad by western observers. Islamic extremist organizations that used such a black flag include al-Qaeda, al-Shabaab, the Islamic Courts Union, the ISIS and Hizbul Islam (2009). Some variant designs depict the second phrase of the shahada in the form of the historical seal of Muhammad." 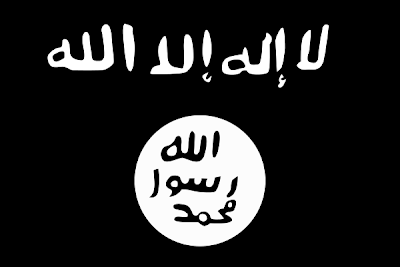 Banner of the Somali Al Shaabab! Seems to be the same as that flag borne high by the ISIL fighter!
"Eschatological symbol in Shi'a Islam" referring to END TIMES! ISIL of course Sunni and opposed to Shia but you get the picture, don't you!