Thanks to the tip from Ken for this item:

I am not so sure it is neither a "secret" or "secretive"!

"The U.S. Navy is quietly converting a 633-foot-long cargo ship into a secretive helicopter carrier with facilities for supporting a large contingent of Special Operations forces and all their gear, including jet skis." 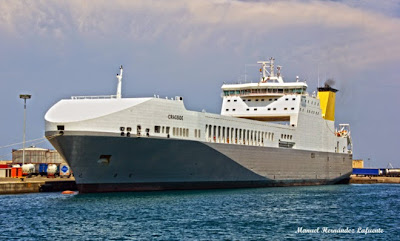 "Cragside will be rigged so it can function as a floating base for up to 200 troops, their weapons, and more."

And here it all is in the proverbial NUTSHELL:

"With budgets shrinking and the cost of new warships going up, up, up, the Navy is trying out a lot of methods for maintaining America's sea presence — cheaply."

CHEAPLY BUT NOT INEFFECTIVELY!

"Cragside's $35-million annual cost is nothing to sneeze at, but it's still less pricey than designing and building a new warship from scratch — provided the Navy's lease lasts only a decade or so. After 20 years of use, it probably becomes cheaper to own a support ship than to rent one."

Compare that annual cost with the amount of money as needed for one Zumwalt class destroyer [$7 billion USD].

And you can see results much quicker too. That ship is needed NOW for global force projection.