Thanks to the book review by Professor Al Nofi of Strategy Page we have yet one more instance of the "Forty-Eighter" of some prominence during that era of the American Civil War.

NOT however a professional military man trained in the European style commanding German speakers composing distinct units of the Union Army.

From that book review of Al Nofi:

"The Civil War in the Words of the Men of the 82nd Illinois."

Dutch no so but referred to by English speakers! Deutsch as in German more appropriate!

"In their letters the troops tell the personal side of soldiering . . . the letters also reveal that they were somewhat older than their 'native born' comrades, more politically aware, and rather liberal."

Rather liberal in the sense of being primarily persons defined as Forty-Eighters. Those European nationals having emigrated to the United States in the aftermath of those failed 1848 revolutions.

Soldiers those Forty-Eighters their politics best described as socialist and many adherents to the teachings of Karl Marx!!

"the 82nd Illinois Infantry Regiment. Approximately two-thirds of its members were German immigrants and most of the other third was composed of immigrants from various countries. Company C was entirely made up of European Jews, and Company I was all Scandinavians."

Hecker himself a "politician and revolutionary" AND an agitator. A fomenter for a cause he thought to be righteous.

"Friedrich Franz Karl Hecker . . . was a German lawyer, politician and revolutionary. He was one of the most popular speakers and agitators of the 1848 Revolution. After moving to the United States, he served as a brigade commander in the Union Army during the American Civil War." 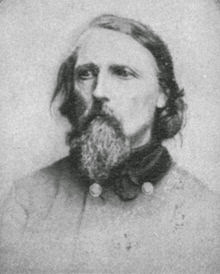 "like most Forty-Eighters, his [Hecker] attention became increasingly focused on domestic political issues in the United States, and in particular the issue of abolishing slavery. When the Illinois Republican Party was organized at a convention in 1856, German-American Forty-Eighters were everywhere conspicuous in the proceedings . . . The Republicans attracted a wide array of political perspectives, with often strongly divergent views except for their opposition to slavery"

Again, as has been noted before, these "German" units serving in the Union Army their performance neither better or worse than the average Federal unit. Their motivation and sincerity of effort for their adopted country hardly however can be denied.