It is reported that Hamas has deliberately targeted the Israeli Dimona facility with rocket artillery fire.

1. "Hamas: We attempted to hit the nuclear reactor in Dimona"

"Three rockets were launched at Dimona in southern Israel on Wednesday afternoon. The Iron Dome intercepted one rocket before it could land, while two other rockets landed in open areas."

"Dimona is the location of Israel's nuclear reactor. There was no indication that rockets damaged any part of the reactor." 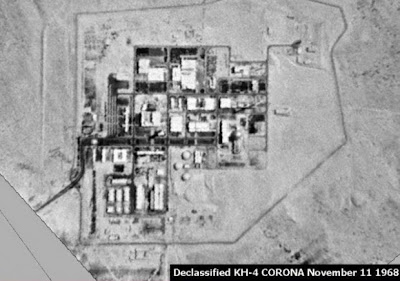 Dimona seen from outer space in a declassified photo as taken in 1968.
"Militants from Hamas's Qassam Brigades said they had launched long-range M-75 rockets towards Dimona."

"Destroying the Dimona nuclear reactor and causing a leak is a long-standing goal of anti-Israel groups."

"According to breaking reports, Hamas has fired several rockets towards the Dimona nuclear reactor.
Destroying the reactor and unleashing nuclear contamination has been a long-standing goal of Hezbollah, Iran and Hamas."

"According to official sources, the rockets actually fired today either missed or were shot down by Iron Dome."

NO hits on the reactor complex or the ancillary facilities evidently. A LEAK of course that of nuclear radiation. Iron Dome the Israeli air defense system designed to intercept mortar and rocket artillery rounds.