From seventy years ago the headlines of the New York Times.

This was Goodwood. British offensive an attempt at breakthrough.

Massed British armor units moving forward from the Normandy beach head only to be thwarted by the 88 mm guns of the Waffen SS!! 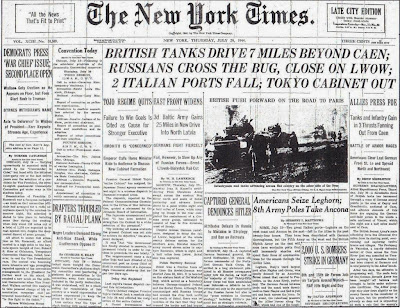 "Operation Goodwood was a Second World War British offensive that took place between 18 and 20 July 1944. British VIII Corps, with three armoured divisions, launched the attack aiming to seize the German-held Bourguébus Ridge . . . while also destroying as many German tanks as possible , , , When Operation Goodwood ended on 20 July, the armoured divisions had broken through the initial German defences and had advanced seven miles before coming to a halt in front of the Bourguébus Ridge"

Generally speaking Goodwood hardly as successful as had been anticipated, rather the losses in tanks horrific. Four hundred British and Canadian tanks destroyed in a mere several days of combat!!

Allied planners and senior commanders hardly deterred however, many of those tanks "back in action" within several days, repairs done expeditiously, that achievement remarkable!

"Normandy 44: The Battle Beyond D-Day"

"400 British tanks  were knocked out in Goodwood, but 300 of them were repaired and back in action in days."

Tank losses either replaced or damaged units repaired and returned to action the allies very good at this:

"Allied units [during the Normandy Campaign], unlike German ones, could be resupplied and kept up to strength. The Sherwood Rangers were part of a brigade of three regiments each with 50 tanks. It received 1,073 new tanks during the campaign in order to keep 150 in the field."