More on the current fighting in Gaza and the phenomenon of tunnel warfare.

Images and YouTube like video available for one and all to see, an attack by Hamas fighters on an Israeli outpost, egress onto Israeli soil from a tunnel dug well in advance.

1. "This Video Shows Hamas Fighters Using Tunnels To Attack A Post Inside Israel"

"Hamas's tunnel network has emerged as a major focus of Israel's ground campaign in the Gaza Strip. The tunnels extend from under populated areas to the other side of Gaza's border with Israel, and were reportedly part of plans for a major attack Hamas was planning for the Jewish holiday of Rosh Hashanah." 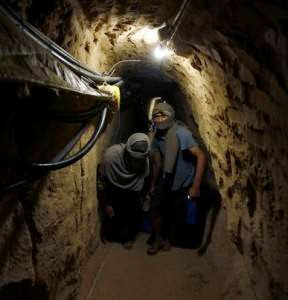 This image purportedly shows a tunnel dug under Gaza. Self-supporting ogive shape and reputedly a lot of concrete used in the construction. Appear to be high enough for a man to walk through in an almost erect posture. Also having electricity, lighting and who knows what else. Some suggest that these tunnels dug by child labor. My original thought that imported professional miners might have worked on the digging. Who knows?

"The ground that Israel leveled in 2004 to create a barren corridor separating Gaza from Egypt is today abuzz with activity on and under the surface."

It is important to understand within the context of Gaza and the tunnel complexes those underground structures part of A COMMERCIAL AND BUSINESS ENTERPRISE AS WELL AS A WAR FIGHTING MEASURE!!

Smuggling in contraband material NOT CONFINED TO MERE MILITARY MUNITIONS to evade the combined blockade of Egypt and Israel on the Gaza Strip.

There are TWO GAZA. One ABOVE GROUND and one BELOW GROUND.