Even more so than Gavrilo Princip, this man responsible for the First World War.

The Serb military officer, nationalist zealot, Black Hand conspirator, and a man not beyond assassination and murder as an instrument of policy.

"Dragutin Dimitrijevic . . . also known as Apis , was a Serbian colonel. He was a leading member of a military group that organized the overthrow of the Serbian government in 1903. He personally organized and participated in the coup against King Alexander and his wife Queen Draga that resulted in their murders, though he was not present when they were killed. He was also the leader of the Black Hand group implicated with assassination of Franz Ferdinand, Archduke of Austria in June 1914. The latter triggered the July Crisis which led to the outbreak of World War I." 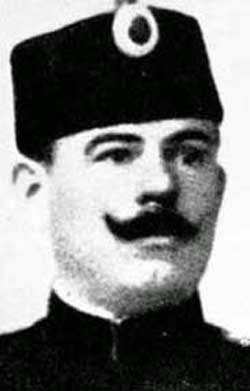 A "bull of a man" physically, mentally very sharp, a career officer in the Serb army and Head of Serb Military Intelligence at the time of the assassination of Archduke Franz Ferdinand.

Also a high ranking member of the Black Hand!!

Those of you who know your Egyptian mythology will remember that Apis was one of the foremost Egyptian gods, a young bull to which devoted worship was the rule. Dragutin physically dominating all those around him, a strong and overwhelming personality without question. For those zealots of the Black Hand, Dragutin was indeed a demi-god!

To what extent Black Hand gave the order to kill Archduke Franz Ferdinand and to what extent Dragutin was involved in the decision has been determined? A devoted reader to the blog can comment?