Here with more images of an Iraqi National Army armored unit as routed by the forces of the insurgent ISIL. Armored personnel carriers [APC's] burning and abandoned.

This makes for very painful viewing.

Much of the equipment as abandoned captured and now in the hands of the insurgents.

This is all the work of the Chechen Boys?

Similar tactics as was the case in Grozny, 1994?

Those Iraqi troops ambushed, a column of American M113 APC destroyed, the first and last vehicle in the column disabled, APC's sandwiched in between unable to maneuver, those troops dismounting from the APC "mowed down" by automatic weapons fire, no response possible!! 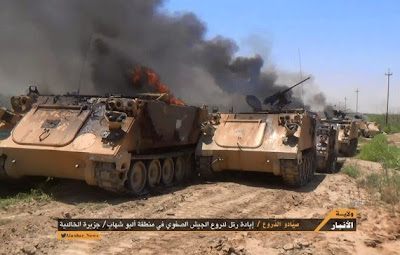 Burning APC's. These vehicles really tightly bunched. Commander not exercising proper control, traveling using overwatch a proper technique to be used in this situation and obviously was not! 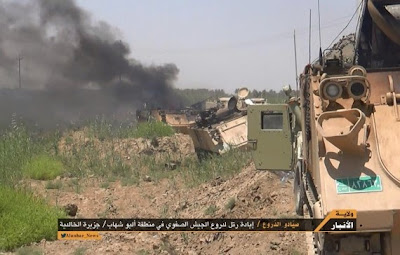 This is the result of an ambush. RPG and heavy machine gun fire with armor piercing rounds doing considerable damage. Troops inside the APC's rather than dismounting and fighting back taking off in disarray. NO leadership or proper combat technique used? Please understand that I was not a combat arms soldier but this all seems rather ridiculous. 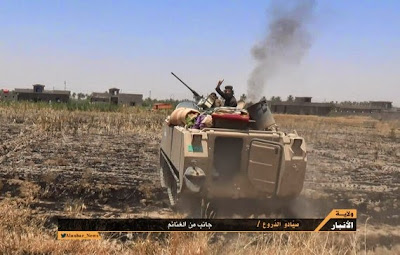 Captured American M113 APC now in the hands of ISIL. And undoubtedly being put to good use.
I might have thought that the performance of the Iraqi would be far superior but this all seems to suggest otherwise. Much to the chagrin of many!