ISIL media savvy and knows how to exploit the Internet! Triumphalism a factor!

"On Twitter, a photograph of a column of Iraqi forces defeated by the insurgents 'Caliphate' (former Islamic State of Iraq and the Levant) in the western Iraqi province of Anbar." 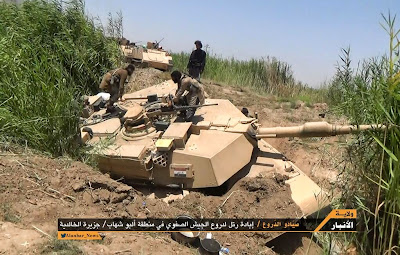 This Abrams evidently caught in an ambush and ran off the road in the process to escape. Got stuck in the sand the crew abandoned, no other damage being apparent. A perfectly good tank probably service-able if the ISIL can extract. And I don't doubt they probably can extract!

"Judging by the presence of tanks M1A1 'Abrams' - it was a column of the elite Iraqi 9th Armored Division (it is the only Iraqi army has these tanks in service), which forces the Iraqi government have strongly stretched over a very large area between the provinces of Anbar, Salah al-Din and Baghdad. From Iraq in recent months has been a lot of pictures of [destroyed] columns of the Iraqi army and the federal police, but this is the first time [that they] so badly ambushed a convoy of armored vehicles of 9th Division" 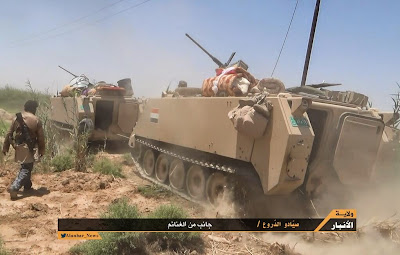 Several American M113 armored personnel carrier now in the possession of ISIL. Expect these vehicles to be put to good use too. These represent only small fraction of that armored force as captured intact by the insurgent. Shame!