Courtesy an acknowledge African authority some observations and ruminations regarding the Mozambique situation.

* The Islamic State jihadi insurgency and threat to Mozambique undeniable.

* The military forces of Mozambique unable and even totally unequal to cope with the insurgency.

* Foreign military aid and involvement to include mercenaries generally eschewed by the regime of Mozambique President Felipe Nyusi.

* Situation dire and yet the Mozambique response poor to nil. Hesitancy most strange!

NOW FOR THE REST OF THE STORY:

"A triangle of vulnerability: Changing patterns of illicit trafficking off Africa’s Swahili coast"

By Alastair Nelson as was written a year ago. 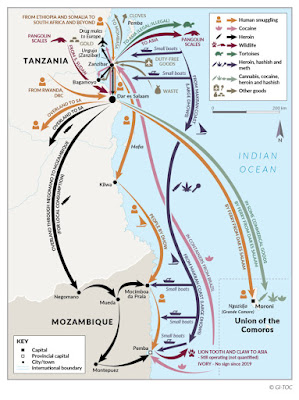 Click on image to see an enlarged view. That Swahili Coast historically a major trade route, goods and services both legal and illegal.

Once more thanks to acknowledged African authority and in the nutshell:

"The trafficking routes through Cabo Delgado are long established. Mozambique has no navy or coast guards so effectively the long coastline of the northern provinces is unpoliced. Not only drugs come this way - - so do rubies, gold, timber, banned wildlife exports and of course there is a traffic in people. This was, after all, an old slave-trading coast."

Devoted readers to the blog take it from there. The relative unwillingness of the central government in Maputo to assume a more proactive approach to the jihadi insurgency is hardly related to just plain military incompetency. Factors of another sort at play. Factors of an less than savory nature.