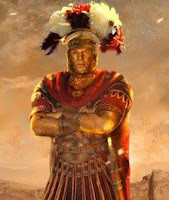 Also from Strategy Page Professor Al Nofi CIC # 475 in finality one more Roman soldier as mentioned by Pliny the Elder a contender for that military man possessing conspicuous courageous behavior and valor on the battlefield!

"Lucius Siccius or Sicinius Dentatus (died circa 450 BC) was a Roman soldier . . . famed for his martial bravery. He was a champion of the plebeians in their struggle with the patricians. His cognomen Dentatus means 'born with teeth."

"Cognomen - - A cognomen was the third name of a citizen of ancient Rome, under Roman naming conventions . . . Hereditary cognomina were used to augment the second name in order to identify a particular branch within a family or family within a clan"

According to Pliny the Elder, over his lifetime Siccius had fought in 120 battles, received 45 honorable wounds . . . Siccius was eight times champion in single combat, with forty five scars on the front of his body and none on the rear.

They just don't make them like Lucius anymore, do they?