"By the beginning of June, we all hated the new AIM-4 Falcon missiles. I loathed the damned useless things. I wanted my Sidewinders back. In two missions I had fired seven or eight of the bloody things and not one guided. They were worse than I had anticipated. Sometimes they refused to launch; sometimes they just cruised off into the blue without guiding. In the thick of an engagement with my head twisting and turning, trying to keep track of friend and foe, I'd forget which of the four I had (already) selected and couldn't tell which of the remaining was perking and which head was already expiring on its launch rail. Twice upon returning to base I had the tech rep go over the switchology and firing sequences. We never discovered I was doing anything wrong". - - Colonel Robin Olds, speaking of the AIM-4 experience in Vietnam.

Thanks to the outstanding Internet web site isegoria.net this item of interest and additionally the rest of the story. Thank you isegoria.

AMERICAN SIDEWINDER AS USED IN AERIAL COMBAT OVER SYRIAN AIRSPACE FAILING!! BUT NOT TO WORRY?

"What’s also worth discussing is the conjecture surrounding the AIM-9X’s failure in this engagement. By the panel’s account it sounded as if the AIM-9X just went stupid/malfunctioned on its own .. . . Missiles fail, especially air-to-air ones. They are complex devices that get battered around under high gravitational forces and slammed down onto carrier decks and runways throughout their lifetime  . . . Regardless, that doesn’t mean that is what happened in this instance or that the AIM-9X is somehow a lousy missile because of it." 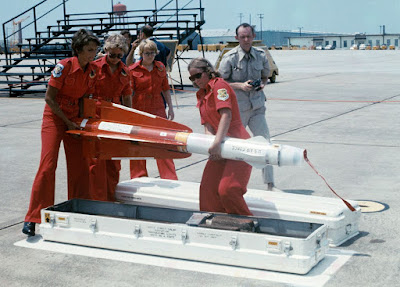 Here this image courtesy the USAF and DoD for a sense of scale of the AIM-4 air-air missile. Combat effectiveness of this missile rated as POOR!

Again, before there was Sidewinder, there was Falcon. AIM-4 air-air missile. Generally conceded to be a major failure. From the wiki that "Operational history" of the Falcon:

"The Air Force deployed AIM-4 in May 1967 during the Vietnam War on the new F-4D Phantom II, which carried it on the inner wing pylons and was not wired to carry the AIM-9 Sidewinder. The missile's combat performance was very poor . . . The weapon was unpopular with pilots from the onset and was supplemented or partially withdrawn in 1969, to be replaced in the F-4D by the Sidewinder after retrofitting the proper wiring."

With these air-air missiles, as it was in the beginning, as it is now, as it always will be, world without end? We might like to think otherwise. But probably guess again.