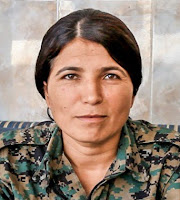 Islamic State combatants in their most crucial strongholds defenses have been breached. The bad guys taking a beating and on the losing end.

If these reports are so, we can expect big things in the next several weeks?

THE HANDWRITING IS ON THE WALL. THE DAY OF RECKONING FOR THE CALIPH AND HIS MINIONS IS AT HAND?

"SDF commander Clara Raqqa announced that the greater proportion of the city is under their control."

AND YES HER NAME IS CLARE RAQQA!

Since the start of Raqqa operation, SDF forces have liberated 14 of the 23 neighbourhoods from ISIS gangs, and control 65 percent [65 %] of the city, SDF commander Clara Raqqa said.

SDF THAT COALITION OF KURDISH AND ARAB FORCES OPPOSED TO ISIL. HAVING AT THEIR DISPOSAL HEAVY AMERICAN FIREPOWER ON-CALL!

From CNN and the article by Hilary Clarke and Tamara Qiblawi, CNN

"Quoting a reporter on the ground, SANA said 'advancing forces coming from the western front met guards of Regiment 137 on Tuesday afternoon, and thus, broke the siege imposed by ISIS terrorists on the city.'"

See previous blog entries the topic of which was Deir Ezzor: