Regarding the German fortifications around Metz as defended 1944 consider the timeless verity of combat as enunciated by Dupuy # 6:

"Defenders chances of success are directly proportional to fortification strength."

Construction of the Metz fortifications even if DECADES OLD rather robust: 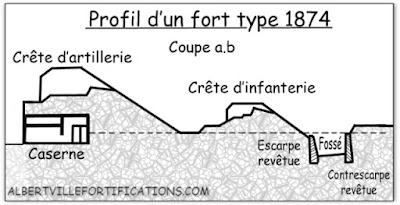 Cross-sectional diagram of the forts as the American might have encountered at Metz. Fortifications as designed and constructed seventy years earlier but nonetheless strong fighting positions. Consisting of a moat, an infantry strong point and an artillery firing position. Underground living quarters and connection tunnels allowing for a dynamic and robust defense.

"Forts had usually several large blockhouse style barracks. These had 3-meter thick reinforced concrete roofs with 2-meter thick walls. They were partially buried under as much as 6 m (20 ft) of compacted earth. Underground tunnels connected all of the structures. The fort also had deep wide trenches, some as much as 9 m (30 ft) in both dimensions. They were also surrounded by a thick layer of barbed wire entanglements."

According to the calculations of the American  military authority/historian/analyst fortifications of this type a force multiplier enhancing the combat capability of a given unit by 60 %!!

I MIGHT THINK TOO THE GERMAN USING LOTS AND LOTS OF LAND MINES!

No wonder why Patton got such a "bloody nose" at Metz!