From the "Living With The Enemy" web site evidently published under the auspices of the famous novelist Jack Higgins we have an article:

"'The German Fortification of the Channel Islands' By Michael Ginns M.B.E."

"As soon as Hitler's forces occupied the Channel Islands he ordered a series of fortifications to defend the only British territory he ever conquered."

"For the infantry there were more than 80 field guns and anti-tank guns in concrete bunkers, plus 51 tank turrets mounted on the so-called Tobruk emplacements." 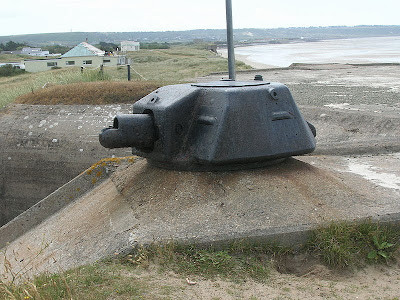 Here is one of those tank turrets. Taken from a French Renault R35 tank as captured by the German during World War Two [WW2]. Turret as ripped out of the tank and placed atop a Tobruk fortification. Vicinity the English Channel Islands.

Those emplacements reinforced concert strong points, miniature forts the bulk of which was underground and as manned by fire teams [five men] and squads [ten men], formidable defensive fighting positions! 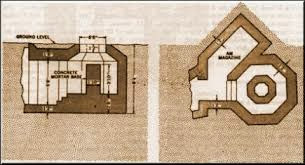 This particular schematic shows that 7/8 of the fortification below ground, good protection for the troops, reinforced concrete the construction material of choice.

Turrets removed from French Renault R35, Hotchkiss H35 and Souma S35 tanks all put to good use by the German.

The German having learned from experience in the North African campaign the versatility and value of such fortifications, NOT NECESSARILY however considered to be strictly defensive in nature!

Also thanks to the DAK Deutsches-Afrikakorps web site:

"The Germans did not want to use fortifications as defences, and referred to them as offensive weapons. The soldiers in the fortifications were low grade soldiers that were supposed to continue to fight long after they have been surrounded, to weaken the penetrating enemy forces."

Those "low grade soldiers" according to Trevor Dupuy having their fighting capability and COMBAT VALUE increased by about two-thirds [2/3] when manning a Tobruk fortification.

Defense is the STRONGER FORM OF COMBAT! Easier to do and more is accomplished with less!

And the Toburk fortification makes thing that much easier!

Sort of Off Topic:

Concerning Defense. In the past 4 or so years a book was published by a ?Historian? that argued that the Germans on the Eastern Front actually were slowly bleeding the Soviets to death, so to speak, by their defensive tactics. Can anyone identify the author and the book?