Here is a warplane [transport] from that era of the Second World War [WW2] that gets poor marks. So much so that the various users had to be asking themselves: "why was this plane even built"? 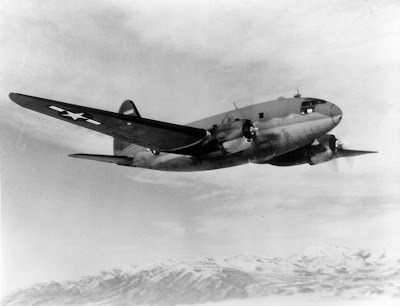 A transport more robust and having more carrying capacity than the C-47. But also the reputation of the C-46 lacking.

The plane seemed to explode more or less spontaneously in a manner that caused a lot of alarm and grief.

"The Curtiss C-46 Commando is a transport aircraft originally derived from a commercial high-altitude airliner design . . . Known to the men who flew them as 'The Whale,' the 'Curtiss Calamity,'  the 'plumber's nightmare', and among ATC [Air Transport Command] crews, the 'flying coffin,'"

Again, on paper, the C-46 having some positive features, able to carry more cargo and TWICE THE NUMBER OF PARATROOPERS WITH GEAR AS THE C-47.

But when used in combat for the massive paratrooper east of the Rhine river during the waning days of WW2, the performance less than spectacular and raising a lot of concern.

Entire planeloads of paratroopers incinerated even before jumping. This of course during VARSITY!

"It [C-46] augmented USAAF Troop Carrier Command in time to drop paratroopers in an offensive to cross the Rhine River in Germany (Operation Varsity)."

"So many C-46s were lost in the paratroop drop during Operation Varsity that Army General Matthew Ridgway famously issued an edict forbidding the aircraft's use in future airborne operations."

That C-46 infamous for not being equipped with self-sealing fuel tanks! "Tokyo tanks" they were called?

From that wiki entry it is suggested that the C-46 was: "unfairly demonized"!

Perhaps more importantly, it can also be suggested that it was not that the C-46 was so poor as the tactics used during VARSITY unsuitable AND that the GERMAN AAA [anti-aircraft-artillery] crews were so GOOD!

Low-level approach at slow speed into a mass concentration of AAA is bound to result in NO-GOOD!

SEAD [suppression enemy air defense] at that time only a gleam in the eye?