Here with yet one more submarine development in the aftermath of the Great War [WW1]. Thanks to the magazine - - "SUBMARINES SINCE 1919".

The submarine as an aircraft carrier:

"The other important development in the years after the Armistice [WW1] was the operation of aircraft from submarines. War experience had shown the importance of reconnaissance to the submarine, especially for locating targets when operating in distant waster."

Aircraft, with one exception all float planes, lowered by crane off the back of a sub into the water, the float plane stored on deck when not needed, flown almost exclusively as a scout or recon aircraft, great increasing the ability of the sub to locate targets. 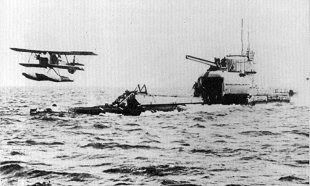 [assume that the maximum line-of-sight distance for a lookout perched high atop the conning tower of a submarine at MOST would be six to seven miles! Scout aircraft able to obviously spot targets at ranges far beyond that!]

Submarines with an organic aircraft launch capability as developed again by a host of nations. Countries and navies to include:

[the American Martin Kitten NOT a float plane, it being requisite for the pilot to crash-land his aircraft, that plane so cramped for space that: "the pilot would have extreme difficulty in bailing out"]

"Flown almost exclusively as a scout or recon aircraft". BUT NOT exclusively so. The submarine as an aircraft carrier brought to the highest level of development by the Japanese in that decade prior to World War Two [WW2], submarines of the IJN [Imperial Japanese Navy] carrying and able to launch ATTACK COMBAT WARPLANES - - the intended target the Panama Canal!!

"Note the large hangar and forward catapult"
The thought being of course that a single bomb in the right spot might well disable the Panama Canal,   American navy and merchant marine unable to move between the two oceans [Pacific and Atlantic] in an expeditious manner! These Japanese submarine aircraft carriers also the largest submersibles prior to the advent of the ballistic missile carrying sub!

A threat that during WW2 for whatever number of reasons NEVER DID MATERIALIZE!!

The concept is sound - - but the execution was poor? Ungainly vessels, the difficulties encountered in launching and recovering aircraft from a submarine found to be immense, the submarine as an aircraft carrier more of an oddity and curiosity than anything else?