"I cannot imagine how the German Army
could have fought and lived through four years
of war against Russia if it had not made
use of these carts, sleighs, and horses."
- - General Rendulic.

Those Kalmucks, fighting alongside the German in the Second World War [WW2], more than likely rode the panje horse into battle?

More like a pony, a shaggy breed, smallish in size, indigenous to Russian and most of eastern Europe, providing transport in the mud of the Russian autumn or the severe cold and deep snow of a Russian winter, an absolute necessity for the armed forces of either side in the conflict.

These are Soviet scouts riding what
appears to be panje horses. Note
the snow is almost belly deep on the horses!

Horses as imported by the German from the western parts of Europe found to be lacking. NOT able to last for long in the sub-zero and arctic conditions as found in Russia, not as hardy or having the stamina required!

"The ubiquitous, shaggy, hardy Russian ponies once more proved indispensable for transport in bad weather. Many of the larger horses that the Germans had brought from western Europe died from the cold, but the native breed could survive in the open at almost any temperature if merely sheltered from the wind."

Panje a term as used by the German applying to the horse, cart and sleds as pulled by the ponies. Those sleds OFTEN the ONLY form of transport still able to function during times of severe cold and deep snow. 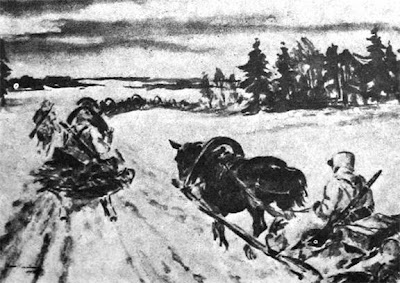 "The Germans called those small, patient animals panje horses, a term they also applied to the native carts and sleighs."

The indigenous "breed" proved to be much more successful than the imported version? It is so. Part of the steep learning curve the German in Russia had to go through was to become reliant upon the locals, man, animal and machine to a large extent. Even the lubricants as obtained for weaponry locally were superior. Weapons oil as made from locally grown sunflower seeds was better than the German variety, more resistant to freezing in the sub-zero cold!